I have this massive pile of Style at home magazines building in my house. It started with a subscription that was only $1 for a year… how could I pass that up?! but it’s been over a year and they just keep coming, not that I’m complaining, who doesn’t love free magazines? My point is, these magazines keep coming and I usually just skim through them to look at the pretty rooms and dream about winning the lottery but this time Kristen was looking through it and came across this gem…. 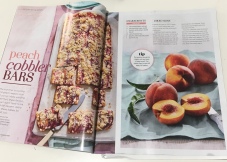 With her housewarming party coming up we thought they would make a good summer treat to serve. Boy were we right! I get pretty nervous about sharing things I’ve baked if it’s something new so, we did a test run during our Thursday night hangout and decided they would be better with some cinnamon in them too (we may be addicted to it) and then kept changing little things from that point. So our bars are based on this delicious looking recipe but they have a Ferah and Kristen flare. We don’t know what the original recipe tastes like but these were such a hit, I don’t think we would do them another way.

We made this with fresh peaches, which definitely would be best but if it’s not peach season and you’re wanting to give this a shot, you can give canned peaches a try. Make sure you drain them well before tossing them, otherwise it will just be peach cobbler with some bread at the bottom rather than a bar. But! if you have fresh peaches, use them!

Also, these go great with some vanilla ice cream!

I’ve broken down the ingredients below so you know what measurements you need for each layer. But all this recipe takes is: unsalted butter, granulated sugar, brown sugar (optional), vanilla, salt, flour, cinnamon, peaches, lemon juice.

Here is what you need:

Here is what you do: 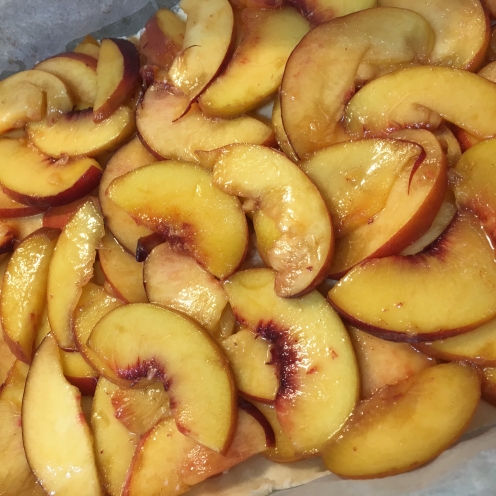 Now you’re going to bake it in your oven for 50 minutes. Check on it around the 30 minute mark, if the top is looking dark place a piece of tin foil loosely over the top.

Let cool before cutting, it is your choice on the sizes you want. The first time we made it, we cut 2″x2″ pieces and for the housewarming we cut the pieces small enough to fit in cupcake liners to make it easier for people to grab and go. 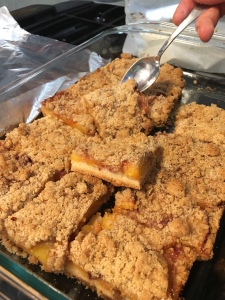 Do you have any peach recipes we should give a try?

Any go to foods when you’re hosting a party?

Let us know, we’d love to hear from you!